How does your balcony garden grow? 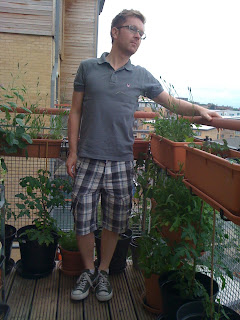 It’s a wonder anything grows on my balcony. On the fourth floor of a new-build by the river Lea, it is at the mercy of the wind that whips off the marshlands opposite. It also faces north-east, meaning that what little direct sunlight it gets – the cold, early morning variety that causes mist to rise magically at dawn, but which is anathema to a growbag tomato – is quickly cast into shade by a nearby apartment block.

But according to Alex Mitchell, author and urban-gardening devotee, even the most inhospitable space can be turned into a food-growing oasis. And, judging her latest book by its cover, she should know. The Edible Balcony is adorned with lush salad sprouting from wall-mounted plastic guttering.

Mitchell, a regular on the gardening pages of The Sunday Telegraph, says balcony gardening is all about being realistic about what you can achieve – but then pushing the seed envelope.

To maximise growing space, I’ve suspended window boxes along the balcony edges, placed soil-warming terracotta planters in the sunniest patches, and put lean-to shelves against the wall to accommodate extra pots. But it could be all for naught if I choose the wrong varieties to plant.

“A north-east facing balcony is not amazing, but not awful,” Mitchell says kindly, before launching into a lengthy list of produce that I’m best off not even attempting. “Anything you associate with hot countries – peaches, apricots, figs… – and aromatic herbs that thrive on dusty Greek hillsides, such as thyme, rosemary and oregano. They need that sun to bring out the oils in their leaves.”

Even harvest-festival staples that, as a vegetarian, I fill up on every day might not take kindly to my balcony. “Peppers, chillies, even tomatoes – chances are they won’t thrive,” she says. “And aubergines would be the most heartbreaking crop of all.” The home-grown ratatouille’s off, then.

She’s right, though. I once tried growing an aubergine from seed. Germinated indoors, I moved the fragile plantling outside during a hot spell – and it rotted at the first hint of rain. However, Mitchell insists there are plenty of crops that *will* take to the less-than-Mediterranean conditions my pad offers.

I had a surprisingly bounteous crop of Gardener’s Delight last year, with enough ripe tomatoes for a fortnight of garden salads. But most never reached, well, fruition. I’m still working through the green chutney I had to boil up with the surplus. “If they don’t have enough sun, they don’t ripen,” says Mitchell. “You’d be better off with cherry tomatoes. Try Sungold, an orange cherry that’s naturally sweet enough to counteract the lack of sun. Even if it doesn’t ripen fully, it will still be sweet enough to eat.”

My local nursery was out of Sungold, so after much reading of labels, I plumped for Supersweet 100, a high-yielding plant producing small and sweet tomatoes; Totem, a dwarf that is “idea for patio containers and produces medium sized tomatoes”; and – out of curiosity – a Moneymaker, the full-size variety which, after repotting, had an immediate growth spurt and became the first of the three to flower. I’m banking on a hot summer to avoid another green-chutney winter.

What about balcony failsafes that won’t let me down, come rain or sporadic shine? “I hope you like salad,” she says. “Anything with an edible leaf is pretty much good for shade. Lettuce, rocket, spinach… Then over the winter, you can grow Oriental varieties such as mizuna, mibuna and mustards.”

“A north-east facing balcony is not amazing, but not awful,” Mitchell says kindly

While that will spare me from buying supermarket salad bags, I had hoped for something a bit less ordinary – at which point Mitchell goes into raptures about leafy greens, the kind I’ve only ever read about on gastropub menus. “You could probably get away with pak choi and chard,” she says, “and kale is another cracking crop: cavolo nero is my favourite variety. I had one plant last year and it fed us a dozen meals. If they’re in the ground well before the last of the summer sun, they’ll grow happily throughout the winter and feed you well into the new year.”

If snipping off salad leaves doesn’t feel like proper gardening, Mitchell says there are plenty of root vegetables that will thrive on a balcony. “You should try beetroot which, as well as the beet, you can grow for the leaves, which are good in salads or steamed like spinach. You could do carrots in pots, the deeper the better – just nothing less than 30cm. And see how you get on with radishes.”

Even in a breezy shade, she says, beans will be a reliable cropper. “Just go for a dwarf runner called Hestia, which grows only a few feet, will twine up balcony railings by itself and won’t mind the wind. I also rate sugar snap peas, which are a bit of a climber. I’ve been growing a variety called Sugar Bon which are so sweet, you can eat them raw.”

But it’s when the conversation turns to growing berries, soft cane fruit and – heavens! – a Victoria plum that the sap really starts to rise. With the right rootstock, Mitchell says I could certainly host gooseberries, Morello cherries (“which you can’t eat raw but you can make jam from”) and tayberries, the raspberry and blackberry hybrid named after the Scotch river. And if they can grow north of the border…

“You could also do raspberries, which like a roomy pot, or a blackberry that doesn’t mind north-facing shade, such as Oregon Thornless. I’ve got one growing that never gets any sun, but which gives a huge amount of berries.”

I could soon have my own season of mellow fruitfulness. My thornless loganberry is producing hairy green fruit, the Autumn King 2 carrots, a long, tapering variety, have taken their terracotta pot, and I’ve got so much rocket, cornsalad and mizuma that it’s starting to bolt. A chilli has even sprouted on a yellowing plant I’d left for dead. And to think Mitchell suggested such exotica would never survive on a balcony.

She is happy to be proven wrong: “It’s like cooking. When you read a recipe and it says do exactly this, and you panic because you haven’t got the right type of chorizo, and end up making it your way. It’s usually fine.

“Seed packet instructions and those in gardening encylopaedias are just best case scenarios,” she says. “I didn’t realise that for years. I kept thinking I couldn’t grow something if I didn’t have a pot that was exactly 28cm. But the rules are just there to be fiddled with. Just plant it, see what happens.”

I’ll let you know how I get on. Now where did I put those aubergine seeds?

* This is a longer version of a feature that first appeared in The Sunday Telegraph. The Edible Balcony by Alex Mitchell is published by Kyle Cathie, price £16.99
Posted by Paul Clements at 14:17

What they're saying about Clapton tweets

Blogs about Hackney (Let me know if you want yours added...)